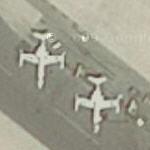 The C-21A is an "off the shelf" military variant of the Learjet 35A, with room for eight passengers and 42 ft³ (1.26 m³) of cargo. In addition to its normal role, the aircraft is capable of transporting litters during medical evacuations.

There are 38 Air Force active duty aircraft, and 18 Air National Guard aircraft in the C-21A fleet. C-21As stationed outside the continental United States are assigned to the theater commanders.
Links: en.wikipedia.org
644 views