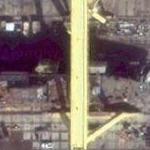 Construction began in 2005 by Northrop Grumman's Ship System Ingalls Shipyard in Pascagoula, Mississippi. The ship was launched on September 29, 2006, and christened November 11, 2006.

During the second quarter of 2007 it is expected that crew members will travel to Pascagoula for training and familiarization, with transfer ownership to the Coast Guard in August 2007. Following Ready for Sea trials, Bertholf will make an east coast patrol, then make way to its home port on the west coast via the Panama Canal, arriving in Alameda, California by the end of 2007.
Links: en.wikipedia.org
899 views