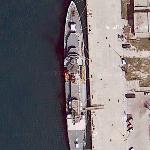 She was first assigned patrol and general icebreaking duties on the Hudson and Delaware Rivers, and the outbreak of war found her stationed at Cape May, New Jersey.
Links: en.wikipedia.org
444 views