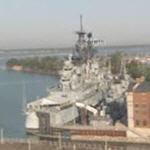 After her decommissioning, Little Rock was taken to Buffalo, New York, where she is open to public touring at the Buffalo Naval & Military Park.
Links: en.wikipedia.org
669 views