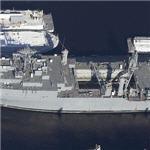 The Anchorage class Dock Landing Ship (LSD) designed to operate as an integral part of a balanced, mobile and modern amphibious strike force. The ship couples a well deck with a flight deck to give greater dimension to the Navy's troop and vehicle lifting capability. Primarily designed to transport pre-loaded heavy landing craft to the shore and discharge them rapidly, the ship is also equipped with machine shops and facilities to provide dry docking and repairs to small boats.

Intrinsic in the well deck operation is a ballasting system that fills the deck with sea water to a depth necessary for loading landing craft such as the LCU and LCAC. The ships are designed to transport and operate heavy landing craft from a large well deck, and have been modified for operations with the Landing Craft Air Cushion (LCAC). Wet well evolutions are facilitated through the use of complex, electro-hydraulically controlled ballasting and deballasting systems. They can accommodate (with/without portable mezzanine deck installed) 2/3 LCAC, 1/3 LCU, 6/9 LCM(8), or 12/18 LCM(6) or 50 LVT in the 131.06 x 15.24 well deck. One LCM(6), 1 LCP, and 2 LCPL can be stowed on deck, handled by the two 50-ton cranes. They have 1,115 m2 of vehicle parking space forward of the docking well.
Links: www.globalsecurity.org
1,595 views