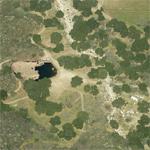 The one year experiment was not completed, as the series was cancelled after the 12th episode aired on October 31.

The land and pond were cleaned up from what you now see in the aerial photograph. A few structures and a walled entrance to the set were built.

The game show Wipeout was filmed on the other side of the ridge just to the west of here. Current birds eye view photos show the Wipeout set.
Links: en.wikipedia.org, www.fox.com
5,706 views