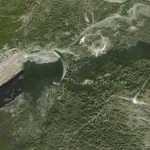 Its 1963 overtopping during initial filling was caused by the lack of consideration by the designers for the geological instability of the mountain on the southern side of the basin. Warning signs and negative appraisals during the early stages of the filling were ignored; the attempt to complete the filling led to a rapid landslide, causing a seiche wave which brought massive flooding and destruction to the area below, wiping several villages away completely and killing 2,000 people.
Links: en.wikipedia.org
2,458 views