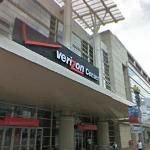 By Matheus_ @ 2012-01-03 09:57:23
@ 38.897346, -77.021043
Washington, Washington, DC (DC), US
Verizon Center (formerly MCI Center) is a sports and entertainment arena in Washington, D.C., USA, named after telecommunications sponsor Verizon Communications, and has been nicknamed the "Phone Booth" because of its association with telecommunications companies. It is located in the Chinatown neighborhood of Washington and sits atop the Gallery Place station on the Washington Metro. The arena is home to the Washington Wizards of the NBA, Washington Capitals of the NHL, Georgetown University men's basketball, and Washington Mystics of the WNBA, and was formerly home to the Washington Power of the NLL from 2001–2002. It seats 20,278 for basketball and 18,398 for hockey. The arena is now owned by Monumental Sports & Entertainment, on land leased from the city of Washington. It was built with 100% private financing and originally owned by Abe Pollin from 1997-June 2010. Following Pollin's death in November 2009, on June 10, 2010, the Pollin family sold Verizon Center, the Wizards, and the Washington-Baltimore area Ticketmaster franchise to Ted Leonsis. Leonsis formed a new management company called Monumental Sports & Entertainment. The arena is largely considered a commercial and cultural success and is regarded as one of the driving catalyst's of the revitalization and gentrification of Washington's Chinatown neighborhood.
Links: en.wikipedia.org
615 views