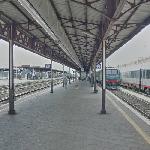 By Mike1989 @ 2013-11-27 03:48:28
@ 45.428955, 10.983939
Verona, Italy (IT)
Verona Porta Nuova is the main railway station of the Italian city of Verona near the city centre in the square of Piazzale 25 Aprile. It was originally opened in 1852, but was substantially rebuilt between 1910 and 1922. It was rebuilt again between 1946 and 1949 after being largely destroyed by allied bombing during World War II. The station serves a number of lines including to Milan, Venice, Bologna and the Brenner pass. It currently handles 25 million passengers annually. Work has recently begun in preparation for it being linked to the Milan–Verona high-speed railway (on which work is now beginning) and the Verona–Venice high-speed railway (on which planning is under way).
Links: en.wikipedia.org
1,043 views