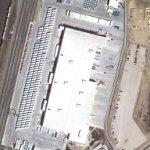 A nacelle is a cover housing that houses all of the generating components in a wind turbine, including the generator, gearbox, drive train, and brake assembly.

Vestas has installed over 41,000 wind turbines for a capacity of just under 40 GW in 63 countries on five continents. The company employs more than 22,000 people globally, and has built production facilities in more than 12 countries.
Links: en.wikipedia.org
984 views