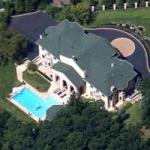 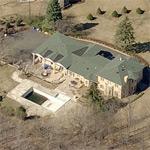 By neotrix @ 2008-07-08 02:00:05
@ 40.825793, -74.264969
Essex Fells, New Jersey (NJ), US
Viacheslav Fetisov is a retired Russian professional ice hockey player, having success in the Russian Federation for CSKA Moscow, and Spartak Moscow and in the US National Hockey League, playing for the New Jersey Devils and the Detroit Red Wings. Internationally, he was a long-time captain for the Soviet Union national team. Fetisov is a member of the Triple Gold Club, a term used for an exclusive group of ice hockey players who have won Olympic gold, World Championship gold, and the Stanley Cup. Fetisov was also a member of the 1980 Soviet Union Team that was defeated by the United States in the "Miracle on Ice" game at the Olympics in Lake Placid. Fetisov is the only person in Russia who has both an asteroid (.8806 Fetisov) and an arena (Fetisov Arena in Vladivostok) named after him.

Apart from his playing career, Fetisov was instrumental in breaking the barrier that had previously prohibited Soviet players from leaving the Soviet Union to join the NHL, when he lead a group of eight Soviet players, including Helmut Balderis, Vladimir Krutov, Igor Larionov, Sergei Makarov, Sergei Mylnikov, Sergei Priakin and Sergei Starikov, into the NHL by leveraging the government's glasnost policy to broker a deal that would allow them to play outside of Russia if they would continue to compete internationally for the Soviet Union. Fetisov's example not only lead to more Russian players joining the NHL in the years that followed, but also inspired many of the best players from across Europe to join NHL Clubs.

After showing a proficiency for being a playmaking defenseman at Russian club CSKA Moscow Fetisov was drafted in the 1983 NHL Draft by the New Jersey Devils, but made his NHL playing debut in 1989 after getting approval from the government to join the NHL. In April of 1995 a few months before the playoffs began, he was traded to the Detroit Red Wings for third-round draft pick, and became part of the Red Wing's 'Russian Five' alongside Igor Larionov at right wing, Sergei Fedorov at center, Vyacheslav Kozlov at left wing and Vladimir Konstantinov on defense. In the 1997 playoffs, the Red Wings went 16–0 when any of the Russians scored a point and 0–4 when they did not, winning the Stanley Cup that season and in 1998. After the 1998 Cup win, Fetisov retired from professional hockey, not before taking the Stanley Cup to Moscow, where the trophy appeared for the first time in Russia.

Since retiring, Fetisov has been an assistant coach with the New Jersey Devils, winning the Stanley Cup again in 2000 from the bench, general manager of the Russian national team for the 2002 Winter Olympics in Salt Lake City where the team won the Bronze Medal, president of CSKA Moscow, and was appointed Russia's Minister of Sport by Vladimir Putin, a post he held until 2008. He is currently a member of the upper house of the Federal Assembly of Russia representing Primorsky Krai, the founder and chairman of the Board of Directors of the KHL and chair of the World Anti-Doping Agency (WADA) Athletes Committee.