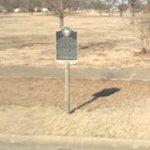 Spot where settlement of town of Bonham began. On 1,250-acre land grant of Texas Republic to Bailey Inglish (1797-1867), former Miller County, Ark., sheriff who led train of settlers traveling by oxcart to this site in 1837.

Here they built a log stockade and blockhouse with gun ports for use in community defense. In a typical fight (1841), the Indians were repulsed, but captured two young boys hunting cows near the fort. (The boys returned later.)