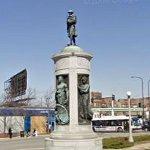 By WacoKidd110 @ 2011-05-26 09:51:55
@ 41.830617, -87.616944
Chicago, Illinois (IL), US
On Martin Luther King Drive and 35th Street stands a tribute to African Americans who fought in France with the National Guard's 8th Regiment (which became the 370th Infantry of the 93rd Division) during World War I. Originally called the "Victory Monument" which was dedicated in 1927, the tribute today is often referred to as "The Doughboy." A figure of a doughboy was added to the top in 1936. "Victory" is a granite monument with bronze sculptures of an African-American soldier in one cove, Victory in another and Columbia in a third niche. The fourth side contains a plaque that lists the soldiers who died. Leonard Crunelle designed the sculptures with architect John A. Nyden.
Links: en.wikipedia.org
507 views