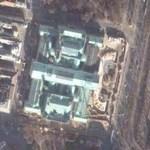 By DonMartini @ 2006-02-10 07:32:49
@ 48.208044, 16.359308
Vienna, Austria (AT)
Vienna's Parliament was constructed in the Greek Classical style to reflect the democratic ideals of the new parliamentary government adopted by the city of Vienna. The building was designed to give an illusion of height, with the tall pillars and the second-story level entrance. A statue of Athena was placed in front of the building, facing the street, not the Parliament, however, further shifting the focus on the Ringstrasse.
778 views