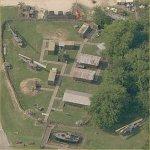 On display is an original River Patrol Boat, which was used to stop and search boat traffic in areas such as the Mekong Delta, the Rung Sat Special Zone, the Saigon River and in I Corps, in the area assigned to Task Force Clearwater, in an attempt to intercept weapons shipments.

The extraordinary aircraft collection includes two Army Huey helicopters that were used in Vietnam following initial fielding in September 1962. The Huey saw service with the 82nd Airborne Division, the 101st Airborne Division, and the 57th Medical Detachment. The Huey became the basis for the creation of the 1st Aviation Brigade in 1966.

The display also is home to a Sea Cobra attack helicopter and many of the actual weaponry that was used during the Vietnam War.
Links: www.patriotspoint.org
1,204 views