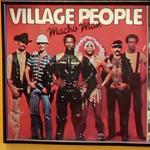 Victor Edward Willis (born July 1, 1951) is a singer, songwriter, actor; and most known as the original lead singer of the disco group Village People. His persona was the Cop and Naval Officer.

Felipe Ortiz Rose (born January 12, 1954) is a founding member of the disco group the Village People, in which he is the Native American. His mother is a Puerto Rican and his father is a Native American (Lakota Sioux).

Randy Jones (born on 13 September 1952 in Raleigh, North Carolina, United States) is an American disco and pop singer and was the original cowboy from Village People.