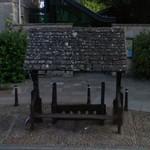 By Dania @ 2011-12-03 13:44:12
@ 51.847586, -1.356975
Woodstock, United Kingdom (GB)
Stocks are devices used in the medieval and colonial American times as a form of physical punishment involving public humiliation. The stocks partially immobilized its victims and they were often exposed in a public place such as the site of a market to the scorn of those who passed by.

Since the purpose of putting offenders in the stocks was to expose them to ridicule and mockery, passers-by were encouraged to throw at those being punished mud, rotten eggs, moldy fruit and vegetables, smelly fish, offal, and excrement (both animal and human). Consequently, many of those who sat in the stocks were very dirty and smelly by the time that they were let out.
Links: en.wikipedia.org
616 views