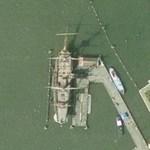 In 1969, the Amsterdam was discovered after being exposed by a low spring tide. It is the best-preserved VOC ship ever found. Archeologist Peter Marsden did the first surveying of the wreck, and he advised further excavation.

The VOC Ship Amsterdam Foundation started researching the wreck, followed by major excavations in 1984, 1985 and 1986, during which huge numbers of artifacts were found. The archeological output was so dense, that new ways of researching needed to be developed, all of which were needed to understand the technological, socio-economic and cultural features of the VOC.