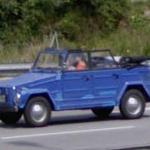 By GlobalPlayer @ 2011-03-31 12:21:50
@ 48.17613, 11.550092
Munich, Germany (DE)
The Volkswagen Kübelwagen (short for Kübelsitzwagen, meaning "bucket seat car") was a military vehicle designed by Ferdinand Porsche and built by Volkswagen during World War II for use by the German military (both Wehrmacht and Waffen-SS). Based heavily on the Volkswagen Beetle, it was prototyped as the Type 62, but eventually became known internally as the Type 82.
Links: en.wikipedia.org
639 views