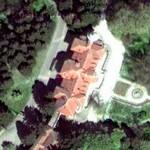 By Dania @ 2010-09-26 17:40:07
@ 42.640115, 23.432288
Sofia, Bulgaria (BG)
Vrana Palace (Bulgarian: Дворец „Врана“, Dvorets „Vrana“) is a former royal palace, located on the outskirts of Sofia, the capital of Bulgaria. It is today the official residence of the deposed Tsar Simeon II of Bulgaria and his wife Tsaritsa Margarita. While the Royal palace in the centre of Sofia (today the National Art Gallery and National Ethnographic Museum) served representative purposes and the Euxinograd palace near Varna was a summer residence, Vrana was the palace where the royal family of Bulgaria spent most of their time.

The extensive lot was bought by Tsar Ferdinand I in 1898 and is situated just outside Sofia. There is a large park and two buildings, the first one built in 1904 as a two-storey hunting lodge commissioned to Georgi Fingov, and the second constructed mainly between 1909 and 1914 as a palace, both with money from the state budget. The earliest building in the complex, the hunting lodge, has been described architecturally as an "exquisite interpretation of the Plovdiv baroque with Viennese decorative elements".

Three rooms of the three-storey palace commissioned to the noted architect Nikola Lazarov were later furnished in the Baroque style, one in the style of the Austrian royal palaces and one in a Bulgarian national style, while the study was designed in a Venetian style. The palace features a carved wooden ceiling, oak wainscoting, built-in metal plates and Delftware. The interior columns are made of Carrara marble and an old Schindler lift is still in use. In terms of architecture, the Vrana Palace combines Byzantine influences, Bulgarian National Revival traditions, Art Nouveau and French classicism.
Links: en.wikipedia.org
677 views