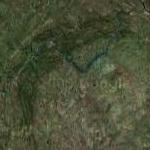 From the UNESCO Advisory Body Evaluation:
The Vredefort Dome meteorite impact structure is the oldest (2023 million years) and largest (radius 190 km) so far found on earth...The impactor that formed the meteorite impact structure at the nominated property was either a large body such as an asteroid with a diameter of about 12 km traveling at a relative velocity of 20 km/sec, or a smaller one, such as the head of a comet, approaching at a much higher speed. The impact event created the greatest single energy release event known for the surface of the earth.

The meteorite impact structure was estimated to have been created in about 4 hours.
Links: whc.unesco.org
991 views

kjfitz
@ 2009-06-26 15:51:33
The asteroid that hit Vredefort located in the Free State Province of South Africa is one of the largest to ever impact Earth, estimated at over 10 km (6 miles) wide, although it is believed by many that the original size of the impact structure could have been 250 km in diameter, or possibly larger(though the Wilkes Land crater in Antarctica, if confirmed to have been the result of an impact event, is even larger at 500 kilometers across). The town of Vredefort is situated in the crater (image).

Dating back 2,023 million years, it is the oldest astrobleme found on earth so far, with a radius of 190km, it is also the most deeply eroded. Vredefort Dome Vredefort bears witness to the world’s greatest known single energy release event, which caused devastating global change, including, according to many scientists, major evolutionary changes.