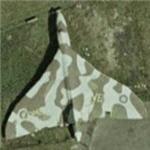 By kjfitz @ 2006-02-07 11:32:30
@ 53.77751, -3.044962
Blackpool, United Kingdom (GB)
First flown in May 1963 from Avro's plant at Woodford, she was fitted with the highest-rated Vulcan engines, the Rolls-Royce Olympus 301. During her operational career XL391 was used for Blue Steel 'stand-off' nuclear weapons trials with the A&AEE Boscombe Down, Wiltshire before moving on to be stationed at Cottesmore, Akrotiri and Waddington.

In service with 44 Squadron at RAF Waddington she was selected along with five other Vulcans as one of the better airframes the RAF still had operational for use in the Falklands War. Following the end of hostilities in the Falklands XL391 returned to Waddington until being taken out of service and offered for tender following 44 Squadron's disbandment in December 1982. Like many other Vulcans offered for tender around this time she was successfully acquired for a reported sum of £5,000 by "The Manchester Vulcan Bomber Society" and was delivered ex-Waddington to Blackpool airport on 16 February 1983.
Links: www.airsceneuk.org.uk, www.airliners.net, en.wikipedia.org
2,998 views