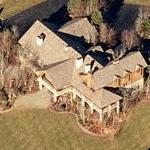 His father, Walter Scott Jr., one of the richest men in America and the former CEO of Kiewit, one of the largest contractors in the world, lives nearby.
Links: investing.businessweek.com
8,048 views