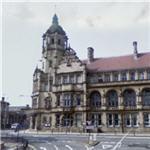 In commissioning a new home, the County Council held an open architectural competition, instructing competitors to prefer "the style of architecture will be left to the competitors but the Queen Anne or Renaissance School of Architecture appears suited to an old town like Wakefield".[3] The winning design was by James S Gibson, who proposed a Gothic design. Apart from minor modifications, such as the installation of electrical lighting his plan was effected. Later a tower was added to the plan.

County Hall was built in the four years from 1894.
Links: en.wikipedia.org
397 views