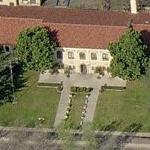 By kjfitz @ 2008-09-05 12:45:04
@ 34.153326, -118.385994
Los Angeles, California (CA), US
On September 4, 2008 John McCain, addressing the Republican National Convention stood before a large screen. At the beginning of the speech the screen showed a large building with a lawn. The building is Walter Reed Middle School in North Hollywood, CA. Speculation is that the image used was mistaken for Walter Reed Medical Center.

Ironically the school was also used as a backdrop for the TV show West Wing:

Beats me why they would have used that image though.

kjfitz
@ 2008-09-05 16:37:03
I'm betting it was in some company's Stock Photo portfolio. There were other uses of stock photos in some of the presentations so it would fit the pattern.

Since it was blown up so large it couldn't have been some random photo from the web. The resolution of an average photo would never blow up cleanly to over 100' wide.