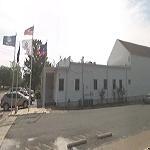 After the war the building was purchased by the American Legion Post #27. In 1946 the citizens of Beauregard parish voted a tax for its maintenance. It was named War Memorial Civic Center in memory of 47 Beauregard parish boys who gave their lives in WWII.
Links: www.beau.org
403 views