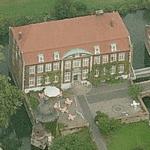 Beginning in the year 1550 the country estate was build at the place of the old castle (in German now called Wasserschloss), though it still had a moat, this was now an element of style; the castle had no longer a military function (see also the article Castle for the terminology). Owner was the family Steveninck zu Broich. In the year 1719 is was rebuilt by Gottfried Laurenz Pictorius in the style of Mannerism. Clients were Herr von Harde and his wife Katharina von Keppel. In the following years the owners changed several times, but in the year 1779 it was again in the ownership of the family Rhemen zu Barenfeld.

After the family died out, the new owners became the family Winnecken, who still own the estate, togehter with the surrounding lands.

In the year 1958 the building caught fire. The reconstruction was almost true to original, so that it still has the spirit of a castle.

In the course of the centuries, many known people visited the fortress and the castle. Among them were: