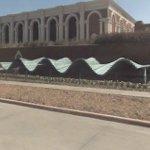 "Wave" is a 40 x 90 foot kinetic sculpture designed by acclaimed Spanish architect Santiago Calatrava. It is a part of the collection of the Meadows Museum at Southern Methodist Univeristy in Dallas. It was unveiled in October 2004 and sits outside on a plaza at street level. The design incorporates a large shallow pool of water with 129 rocking bronze bars running its length. The bars move sequentially, creating a four-cycle wave motion in space above the water. The bars do not touch the water. Instead, their wave motion is reflected in the pool. The pool is made of black granite, with slow-moving water about four inches deep, which creates an almost-still reflecting surface.
Links: en.wikipedia.org
683 views