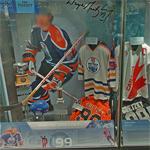 Widely considered to be the best player in the history of the sport, Gretzky rewrote the record books during his playing career. He played his rookie year in the World Hockey Association with Indianapolis and Edmonton. The next year, Edmonton was absorbed by the NHL after the WHA folded. He played nine more seasons with Edmonton before being traded to Los Angeles. He played almost eight seasons in LA and a short stint with St. Louis before finishing his career with three seasons with the New York Rangers, retiring in 1999. He finished his NHL career with 2,857 points, nearly 1,000 more than the second highest total (former teammate Mark Messier).

This photo is flawed by Google's ridiculous decision to blur faces inside of this museum.
Links: en.wikipedia.org
437 views