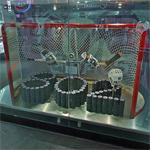 Gretzky's childhood idol, Gordie Howe, held the NHL record of 801. Gretzky extended the record to 894 by the time he retired in 1999. However, if goals scored in the defunct World Hockey Association are included, Howe leads Gretzky 975 to 940.

This display at the Hockey Hall of Fame features 802 hockey pucks, as well as the puck, stick, gloves, helmet, and net used in setting that record.
Links: en.wikipedia.org, www.youtube.com
479 views