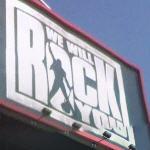 By kjfitz @ 2010-11-18 11:14:40
@ 50.94254, 6.962352
Cologne, Germany (DE)
We Will Rock You (often abbreviated as WWRY) is a jukebox musical, based on the songs of Queen and named after their hit single of the same name. The musical was written by British comedian and author Ben Elton in collaboration with Queen members Brian May and Roger Taylor. The musical was first produced in London by Queen Theatrical Productions, Phil McIntyre Entertainment and Tribeca Theatrical Productions, with Christopher Renshaw as director, Mark Fisher as the production designer, Willie Williams as the lighting designer, Williams & Fisher as co-video directors, Tim Goodchild as the costume designer, Arlene Phillips as choreographer and Bobby Aitken as sound designer.

The musical opened in the West End at the Dominion Theatre on May 14, 2002, with Tony Vincent, Hannah Jane Fox, Sharon D. Clarke and Kerry Ellis in principal roles. The musical was panned by critics, but was an audience favourite and is the longest-running musical at that venue. The story takes place in a tongue-in-cheek dystopian future where originality and individualism are shunned, and a lone "Dreamer" appears who can fulfill a prophecy that will enable the return of rock 'n roll.

A number of international productions have followed the original, and We Will Rock You has been seen in Ireland, Australia, Canada, Russia, Spain, Japan, South Africa, Zürich, Vienna, New Zealand, South Korea, Singapore, Bangkok and Hong Kong. As of July 2009, productions are still active in Great Britain, Italy and Germany. The Dutch production will premiere at the end of summer 2010. The Swedish production will premiere in the autumn of 2010.
Links: en.wikipedia.org
576 views