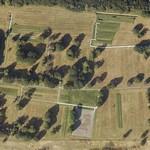 In 1939, the Dutch government erected a refugee camp, Centraal Vluchtelingenkamp Westerbork, in which people--mostly from Germany, but also from Austria, Czechoslovakia and Poland, and mostly of Jewish faith--were housed after they had tried in vain to escape Nazi terror in their homeland. During World War II, the Nazis used the facilities and turned it into a deportation camp for Jews, about 400 Gypsies and, in the very end of the War, for some 400 women from the resistance movement.

Between July 1942 and September 1944, almost every Tuesday a cargo train left for the concentration camps Auschwitz-Birkenau, Sobibór, Bergen-Belsen and Theresienstadt. In the period from 1942 to 1945, a total of 107,000 people passed through the camp on a total of 93 outgoing trains. Only 5,200 of them survived, most of them in Theresienstadt or Bergen-Belsen, or liberated in Westerbork.

Anne Frank stayed in this hut from August until early September 1944, when she was taken to Auschwitz.

Anne Frank and her family were put on the first of the three final trains (the three final transports were most probably a reaction to the Allies' offensive) on September 2, 1944 for Auschwitz, arriving there three days later.
Links: en.wikipedia.org
729 views