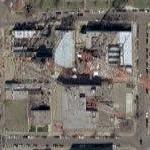 The Western Telegraph Company Tenley site was built in 1947 and is the only architect designed building in the nation designed solely as an antenna structure. In March 1945 the FCC authorized the Western Union Telegraph Company to place into service an experimental microwave relay system between New York and Philadelphia. The system to beam telegraph between stations used radio frequencies that had previously only been used by military radar systems.