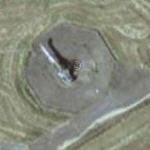 By kjfitz @ 2008-08-27 12:08:10
@ 52.132008, .973175
Wattisham, United Kingdom (GB)
The Westland WAH-64 Apache is a licence-built version of the Boeing AH-64D Apache Longbow attack helicopter for the British Army. The first eight helicopters were built by Boeing, the remaining 59 were assembled by Westland at Yeovil from Boeing-supplied kits. Changes from the AH-64D include Rolls-Royce engines and a folding blade mechanism allowing the British version to operate from ships. The WAH-64 is designated Apache AH Mk 1 or AH1 by the UK's Ministry of Defence.

The Bristol Bloodhound was a British surface-to-air missile developed during the 1950s as the UK's main air defence weapon, and was in large-scale service with the Royal Air Force (RAF) and the forces of four other countries. The Bloodhound Mk. I entered service in December 1958 and the last Mk. II missile squadron stood down in July 1991, although Swiss examples remained operational until 1999.
Links: en.wikipedia.org
838 views