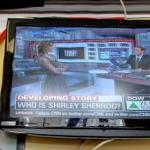 By kjfitz @ 2012-09-22 13:55:02
@ 33.771457, -84.388672
Atlanta, Georgia (GA), US
On July 19, 2010, Shirley Sherrod was forced to resign from her appointed position as Georgia State Director of Rural Development for the United States Department of Agriculture because of video excerpts from her address to a March 2010 NAACP event and commentary posted by blogger Andrew Breitbart on his website. Based on these video excerpts, the NAACP condemned Sherrod's remarks as racist and U.S. government officials called on the official to resign. But, with review of the complete unedited video in full context, the NAACP, White House officials, and Tom Vilsack, the United States Secretary of Agriculture, apologized for the firing and offered Sherrod a new position.

Extensive media coverage of the excerpted videos, various parties' comments, and later corrections when the full story was discovered, exacerbated the affair. The event brought to the forefront current debates regarding racism in the United States, cable news reporting, ideological websites on the internet, and decisions made by President Barack Obama's administration.

The Obama administration apologized to Sherrod, and offered her a full-time, high-level internal advocacy position with the USDA, which she ultimately declined. In 2011, Sherrod initiated a libel lawsuit against Breitbart and co-defendant Larry O'Connor for defamation. Their attorney filed for dismissal two months later on First Amendment grounds. In February 2012, defendants' motion for dismissal under the anti-SLAPP law was denied and subsequently appealed to the U.S. District Court for the D.C. Circuit.
Links: en.wikipedia.org
525 views