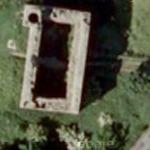 By kkeps @ 2011-09-10 10:34:55
@ 54.415466, -1.259911
Whorlton, United Kingdom (GB)
Whorlton Castle is a ruined medieval castle situated near the abandoned village of Whorlton in North Yorkshire, England. It was built in the early 12th century as a Norman motte-and-bailey associated with the nearby settlement. The castle is an unusual example of a motte and bailey that remained in use throughout the Middle Ages and into the early modern period. Built to overlook an important road on the western edge of the North York Moors, the castle fell into ruin as early as the mid-14th century. The site nonetheless continued to be inhabited until at least the early 17th century. Little now remains of the castle itself, other than the remnants of some cellars or undercrofts. The ruined shell of a 14th-century gatehouse still survives, albeit in fairly poor condition. It is a listed building and is privately owned but can be visited by the public.
Links: en.wikipedia.org
409 views