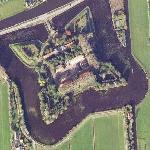 They started to build this fort around 1673. In 1747 they build the big gunpowder building and kept building several object till 1951.

In 1939 it was used as a storage location for ammunition and light hand guns. In 1940-1945 it was used by the Germans as "Zeugambt der Deutsche Marine". After the liberations of the Netherlands the fort was used by the "Nederlandse Binnenlandse Strijdkrachten" a kind of militia that took over between the Germans-Liberators-Dutch Government.