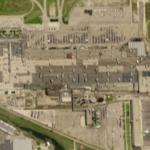 The women working at the plant were the inspiration for Rosie the Riveter, a cultural icon of the United States, representing the American women who worked in factories during World War II, many of whom produced munitions and war supplies.
Links: en.wikipedia.org
674 views