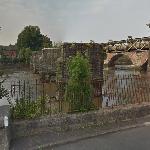 What's left today:
All the iron spans have been removed, but the piers still remain. The embankment of the south side is still clearly visible. The bridge now carries som form of pipe line.
Links: www.disused-stations.org.uk, en.wikipedia.org
583 views