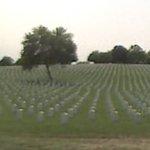 From 1867 until 1871, the home buried its soldiers in private cemeteries in the Milwaukee area. In 1871, a cemetery opened on the grounds. Originally known only as Soldiers Home Cemetery, it wasn’t until 1937 the name was changed to honor General George Wood, a longtime member of the Soldiers’ Home’s Board of Managers. It became a national cemetery in 1973.