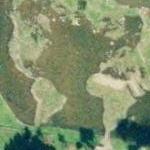 In 1943, Søren Poulsen, the creator of the World Map, was working on the drainage of the surrounding meadows. He found a stone shaped like Jutland, which inspired him to create a small world of his own. During the winter months, with the use of primitive tools, big stones were placed carefully on the ice – and when spring arrived they could easily be tilted into place, and slowly the World Map took shape.

The World Map was created between 1944 and 1969, and measures 45 metres by 90 metres (49 yards by 98 yards). One 111-kilometre (69 miles) degree of latitude corresponds to 27 centimetres (11 inches) on the map. Owing to the difficulties of spreading out our planet's globular shape, the Northern Hemisphere is marked in two places, thus ensuring a better impression of the correct distances between the countries. Red poles mark the equator.
Links: en.wikipedia.org
892 views