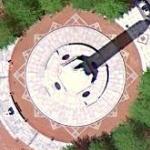 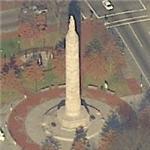 Cret won the competition for Providence's memorial to those who served in World War I with this impressive composition, comprising a base with relief panels of military materiel and emblems, a fluted shaft with a relief band of allegorical figures at its base, and a monumental figure at the top variously identified as Victory or Peace. This is one of numerous war memorials by Cret, an internationally acclaimed architect who developed a modernist style evolved from an artful and sophisticated simplification and reinterpretation of classical forms. The monument was originally sited behind the Federal Building on the bridging that until recently covered the Providence River at that point, officially designated Memorial Square. It was relocated to allow removal of the bridging and relocation of the rivers.
Links: www.providenceri.com
633 views