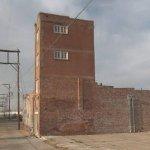 By WacoKidd110 @ 2011-03-25 11:34:39
@ 33.914235, -98.489655
Wichita Falls, Texas (TX), US
The Mcmohan Building in Wichita Falls,Texas is the World’s Smallest Skyscraper.The favourite myth behind the tiny structure is that it was the result of a scam where a Con Artist raised funds of $200,000 for what investors presumed would be a 40 story building in Wichita Falls. They failed to spot the fact that the plans were scaled in inches rather than feet. After the 10′ x 16′, 4-storey building was built, he could not be charged since it was a legal binding contract. The victims simply hadn’t read the proverbial fine print.

However,the true story about the origin of the building is a bit dull.Office space during the boom was hard to find let alone land to build office space. A builder named Mcmohan took matters in his own hands,and with the help of his own crew, constructed the four storey tower on a small unused piece of property without prior permission of the owner who lived in Oklahoma. Initially, six companies occupied this tiny building until the boom ended and office space was not so hard to come by.

The building,originally, did not have a staircase to the upper floors, only a ladder. The architectural design of the building is quite beautiful showing off classical details and intricate brick work.Today the skyscraper and its attached building, house an antique shop,and is undergoing a restoration.It is fondly referred as the “Littlest Skyscraper” and is a treasured monument.
Links: en.wikipedia.org
964 views