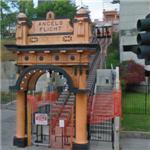 The funicular has operated on two slightly different sites, using the same cars. The first Angels Flight operated from 1901 until it was closed in 1969 when its location was redeveloped. The second reopened nearby in 1996, and closed again in 2001 after a fatal accident. This second version began operating again on Monday, March 15, 2010 after being out of service for nine years. The cost of a one-way ride is currently 25 cents.
Links: en.wikipedia.org
596 views