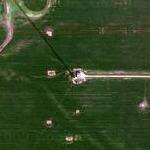 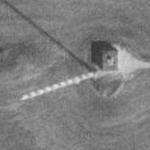 The tower is located three miles west of Blanchard, North Dakota (at 47°20′32″N, 97°17′20″W), which is roughly halfway between Fargo and Grand Forks. It became the tallest artificial structure upon the completion of its construction on August 13, 1963. The mast was surpassed in height by 18 m (57 ft) in 1974 by the Warszawa radio mast near Konstantynow, Poland, but that collapsed on August 8, 1991, making the KVLY mast again the tallest structure on land (The Magnolia Tension-leg Platform currently holds the tallest structure record). When built, the UAE's Burj Dubai, presently slated for completion in 2008, might surpass the mast as the tallest land structure.

Owned by the Meyer Broadcasting Company (now North Dakota Television, LLC) of Bismarck, the tower broadcasts at 316 kW for television station KVLY (channel 11, an NBC affiliate) which is based in Fargo. The tower provides a broadcast area of roughly 30,000 square miles (78,000 km2).

Its overall height above mean sea level is 926 m (3,038 ft). Some time after its completion, the Federal Aviation Administration imposed a limit of 2,063 ft, based on this tower's height, on future construction; consequently, no taller structures may legally be built in the U.S. at present.

The call letters of the television station for which it was built were originally KTHI, the "HI" referring to the height of the mast. The top is reachable by service elevator or ladder.
Links: en.wikipedia.org
3,578 views