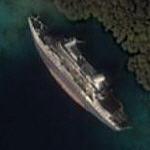 On April 30, 2000 at 4:00 pm local time (0500 GMT) Sunday, The ship struck a large uncharted rock or reef on the Sandfly Passage, Solomon Islands. A distress signal was sent out by the captain and was received by Solomon Islands capital Honiara. A passenger ferry was dispatched to the ship where all passenger were then transported to safety. The captain then brought the ship into Roderick Bay after the ship began to list 20 degrees and grounded the ship to avoid sinking. After underwater surveying of the ship, the World Discoverer was declared a "Constructive Loss". The ship has remained in Roderick Bay ever since. There are no reports of any oil or petroleum or other pollutant spills were reported as a result of the impact.

The World Discoverer still sits in Roderick Bay on Nggela Island with a 46 degree list. The closest salvage companies to try and salvage the ship station out of Australia found the ship ransacked by the locals and other factions. The Solomon Islands was undergoing civil war and was boarded with equipment taken from the ship. Further tidal activity also damaged the ship even more.
Links: www.artificialowl.net, en.wikipedia.org
20,786 views

Anonymous
@ 2013-03-10 13:05:34
My dad and stepmom were on that ship when it sank. He was a guest lecturer on board and I had travelled with him on that very ship in 1995. The captain had the crew lock all the cabins before abandoning it so they could recover people's belongings once a salvage team was sent to assess the damage and recover what they could from the ship. However it had been stripped of anything and everything when they arrived. My dad says that as he and the others waited to be rescued he saw the locals swarm the ship and carry the zodiacs away like ants carrying a breadcrumb. A local man who was leaning against a coconut told him that it had been the third accident there that year (this was in April!). My dad told him why was the reef not marked on the charts!? The local guy laughed and replied in his broken English: "Bad for business." I had lent my stepmom two dresses and a pearl necklace I'd bought right before their trip because she had complained that hadn't anything to wear for the fancy dinners on board. I have a scar on my elbow from an accident I had in college one night when wearing one of the dresses I lent her. I always think of what's left of that red dress rotting in a corner in one of the lower deck cabins, near a box of my dad's books...