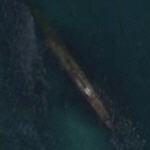 By kjfitz @ 2006-12-21 13:22:50
@ -38.244075, 144.703057
Melbourne, Australia (AU)
Towards the end of 1914, early in World War I, disturbing rumours began to circulate that the newest German submarines were capable of a much higher surface speed than British boats, one report giving their speed at about 22 knots. The rumours were sufficiently strong to force serious consideration of the matter by the Admiralty, and at the same time consideration was given to the idea that submarines should have a high enough surface speed to be able to work with the fleet. The reports concerning the speed of the German submarines proved to be spurious, but the idea of a British submarine with a high surface speed gained ground. The immediate result of this concern was the development of the J Class, which were unique with their three shafts. Originally eight boats were planned but this was reduced to six and then increased to seven. As a result of these changes the boats originally intended to be J7 and J8 were renumbered in April 1915 as J3 and J4 respectively.

HMS J3 commissioned in the Royal Navy on 27 April 1916 and was allocated to the 11th Submarine Flotilla based at Blyth, Northumberland.

Following the conclusion of hostilities in World War I, the Admiralty in 1918 presented the six remaining boats of the J Class to the Australian Government – J6 had been sunk in error in 1918 by a British ship. All the submarines commissioned into the Royal Australian Navy at Portsmouth on 25 March 1919, as tenders to the submarine depot ship HMAS PLATYPUS, J7 being the senior boat. The Commanding Officer of J3 was Lieutenant Henry K.B. Mitchell RN.

After uneventful service, little of which was spent at sea, J3 and her five sisters paid off into Reserve at Westernport on 12 July 1922. The boats had become victims of the worsening economic conditions of the time, coupled with their high cost of maintenance.

J3 was dismantled and the hull sunk as a breakwater at Swan Island, Port Phillip Bay, in 1926.
Links: www.navy.gov.au
2,885 views