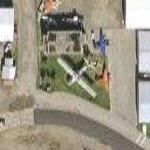 While operating with the 10th Rescue Squadron in 1947 at Elmendorf Air Force Base, the Catalina landed at Dago Lake on the Alaska Peninsula. It was an emergency landing caused by engine failure. As government surplus, it was purchased several years later by the R. S. Richards family, stripped of parts and left at Dago Lake until 1984. A gigantic recovery project conducted by the National Guard and air museum finally brought the huge amphibian to the museum in 1984.

The most famous flying boat of WW II, the PBY Catalina was built in large numbers, and some are still in use today. While it was slow by contemporary standards, the PBY more than made up for its lack of speed with its reliability and great range, as well as the fact that as a flying boat it could land on the water for rescue missions. Its long range made it an excellent reconnaissance aircraft over the world's oceans. It could be used as a bomber when other aircraft were unavailable, and Catalinas attacked targets at sea with bombs, depth charges, and even torpedoes. [daveswarbirds.com]
Links: www.pby.com
1,019 views