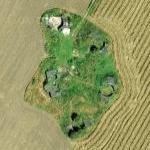 Four anti-aircraft guns, a command centre and a battery base were installed in what were formerly farmer's fields, as part of the Sheffield Defence System following the Blitz of 1940/41.

The Bolton Ack-Ack camp as it became known, housed four 3.7-inch anti-aircraft guns that served as one of eight battery's defending Sheffield's munitions haven - but it never fired a shot.

Two hundred and fifty men and women worked the battery during the months it was manned.

When the doodlebug bomb was brought into use in late 1944, the battery workers were deployed to coastal towns to man Ack-Ack guns built to fight the latest menace.
Links: www.southyorkshiretimes.co.uk
3,507 views