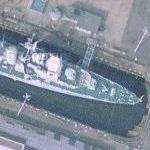 She served in World War II, joining the 6th Destroyer Flotilla, Home Fleet, taking part in operations off Norway. In February 1945 she escorted convoy RA-64 from the Kola Inlet in Russia, suffering attacks from planes and U-boats and a force 12 hurricane and severe icing, and losing only three of thirty-four ships. This action earned Cavalier a battle honour.

HMS Cavalier was one of 96 emergency destroyers ordered for the war effort between 1940-42. She was among the first ships to be built with a partially welded hull, the forward and after parts, while amidships remained riveted to ensure strength. The new process gave the ship additional speed. In fact in 1970, a race was arranged between HMS Cavalier and the frigate HMS Rapid to decide which was faster. Cavalier beat Rapid by 30 yards, reaching an average speed of 31.8 knots.

Cavalier was decommissioned in 1972, and is now the last surviving destroyer of the Royal Navy to have served in World War II. She is currently a museum ship at Chatham Historic Dockyard. HMS Cavalier now resides in No. 2 dry-dock where HMS Victory was built.
Links: en.wikipedia.org
1,226 views

Anonymous
@ 2014-04-23 02:49:45
There is now a complete Google Maps Business View Tour of Cavalier at cinsidemedia.com /hmscavalier